Is it Time to Change over to LED Light Bulbs? 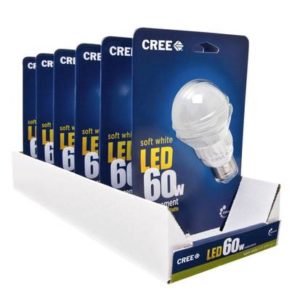 If you’ve been paying attention, you’ve noticed incandescent light bulbs have been disappearing from store shelves.

I set out last week to Home Depot, Lowe’s, Target, Best Buy and Wal-Mart to see what was available as an LED light bulbs replacement for a 60-watt bulb.

Watt’s a lumen?
The first thing you’ll realize when shopping for light bulbs these days is that watts are out and lumens are in.

You’ll be much better off if you can remember that 40 watts equals 400 lumens, 60 watts equals 800 lumens and 75 watts equals 1,100 lumens. These figures are approximate and may vary depending on manufacturer.

Why don’t we keep the watt system we all know? CFL and LED light bulbs use much less wattage for the same amount of light. An average 800-lumen LED bulb only uses 10 watts of power.The same 800-lumen CFL uses 13 watts.

Color temperature
You’ll also notice that LED bulbs come in different color temperatures, which equate to how yellow or blue the light looks.
The scale runs from 2,700 degrees Kelvin (abbreviated as K), which will remind you of the warm, yellow light of incandescents, to 5,000 K, which is a bluer, more daylight or natural tone.

The 2,700 K bulbs are sometimes called warm or soft while the 5,000 K are usually called daylight or natural.

Just the facts
I was pleased to see a fact box on the back of each bulb. It looked like the nutrition labels you see on food packaging. It lists the lumens, estimated yearly energy cost, estimated life span, light temperature and energy used, in watts.

To dim or not to dim
Unlike most CFLs, dimming is a benefit of many LED light bulbs. In fact, most LED light bulbs I found could be dimmed, but a few could not. The ability to dim is noted on the packaging, but it’s not always on the front or in large type. If dimming is important, read closely before you buy.

The pricing
We’ve been spoiled for decades with cheap light bulbs that didn’t last all that long.

A year or two from an incandescent bulb is a long time, and frankly we didn’t gripe too much because they cost less than a dollar. Most traditional bulbs were rated at 1,200 hours.

At 11 cents per kilowatt hour, a 60-watt bulb used three hours per day costs $7.21 per year in electricity.
CFLs hit shelves in the mid-1980s and they were expensive, but promised a life of about 6,000 hours.

Now CFLs can be found for a dollar (in multipacks) and they are the best bang for the buck, although if you have them in lamps that are used frequently for short tasks (five minutes or less), they can have a life span as short as traditional bulbs.

So what did I find available around town?
Home Depot
There are a lot of LED choices at Home Depot. Its flagship LED offering is from Cree, a bulb manufacturer from North Carolina.
There are two 800-lumen Cree bulbs to choose from — a 2,700 K version for $12.95 and a 5,000 K version for $13.95. Both are dimmable.
I chose the 2,700 K version and find the light to be very pleasing. I’ve been using this bulb in my living room table lamp.
Cree bulbs have a 10-year limited warranty.

Lowe’s
With a selection of LEDs smaller than Home Depot, Lowe’s flagship bulb seemed to be the Utilitech Pro LED, at 800 lumens for $10.98. The dimmable bulb is 3,000 K, so it’s on the warm side. I couldn’t locate a daylight version of this in the store or on the Lowe’s website.
I found the light to be a tad bluer, but very easy on the eyes. Utilitech is a division of Feit, which is a manufacturer of many LED bulbs available in stores and online. Utilitech bulbs have a three-year limited warranty.

Wal-Mart
I was surprised to find more than one brand of LED bulb at Wal-Mart, and even more surprised to find Wal-Mart’s house brand, Great Value, represented.The Great Value 800-lumen LED bulb came in the cheapest at $8.88, but I needed to read all the fine print, because the bulb I chose can’t be dimmed. Be sure to read the box before you buy. The boxes are identical except for the word “non-dimmable” on the left side of the box in 10-point type. From the front, you can’t tell you’re buying a non-dimmable bulb unless you turn the box and look.
I was impressed that the cheapest bulb performed just as well in my living room as the most expensive. The dimmable version of the bulb costs $9.88. Great Value bulbs have a three-year limited warranty.

Best Buy
I was pleasantly surprised by Best Buy’s offering, which was very small. I was surprised because of the price. The 800-lumen Insignia LED 3,000 K bulbs cost $9.99 each, but they rang up at the register for $7.99. You have to love a hidden sale. The bulbs are not in stock in very many Best Buy stores; you can check bestbuy.com to see where they are available. The Insignia bulbs have cooling fins along three areas of the bulb, but that doesn’t hinder the light. The dimmable bulb provided a very even and bright light. Insignia bulbs have a 10-year limited warranty.

Target
I was disappointed at the almost complete lack of LED bulbs at my local Super Target. There was one GE 400-lumen LED bulb on the entire light bulb aisle — just one. It cost more than $20, so I left it there. Maybe Target will get more serious about carrying LED bulbs in the future.

Conclusions
All the bulbs tested performed well. I’d be tempted to wager you couldn’t tell one brand from another if they were installed in the same lamp. So I’m recommending you shop for price and availability. The Wal-Mart Great Value bulbs performed just as well as the most expensive bulbs from Cree. I have no problem recommending Great Value, but since they just came on the market in late 2013, there have not been independent tests or very many reviews yet.

The Insignia bulb from Best Buy was the low-price winner, but you may want to price-check before you buy. I have no idea how long the sale pricing will last.

All the bulbs should last 20 years, so think big picture. The estimated yearly cost of running LED light bulbs for three hours per day is $1.32. Over a 20-year life span, you’ll save more than $117 in electricity per bulb.